Weeping for the World 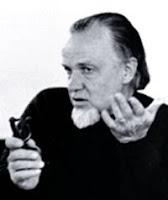 When I was a very mixed up teenager back in the 1970's, befuddled by the potent mix I had drunk of secular humanism and rationalism, served to me by popular media and more serious philosophy, Francis Schaeffer's writings took me to task and pointed me down the road back home to God. In Learning to Cry for the Culture, posted yesterday on Christianity Today magazine's website, John Fischer writes,

Francis Schaeffer was hard to listen to. His voice grated. It was a high-pitched scream that, when mixed with his eastern Pennsylvania accent, sounded something like Elmer Fudd on speed. As freshmen, unfamiliar with the thought and works of modern man, we thought it was funny. As seniors, it wasn't funny any more. After we had studied Kant, Hegel, Sartre, and Camus, the voice sounded more like an existential shriek. If Edvard Munch's The Scream had a voice, it would have sounded like Francis Schaeffer. Schaeffer, who died in 1984, understood the existential cry of humanity trapped in a prison of its own making. He was the closest thing to a "man of sorrows" I have seen.

I grew up with a Christianity that was predisposed against sorrow. To be sad was to deny your faith or your salvation. Jesus had made us happy, and we had an obligation to always show that happiness. Then Francis Schaeffer came along. He could not allow himself to be happy when most of the world was desperately lost and he knew why. He was the first Christian I found who could embrace faith and the despair of a lost humanity at the same time. Though he had been found, he still knew what it was to be lost.

... Schaeffer was the first Christian leader who taught me to weep over the world instead of judging it.

... Schaeffer was a rare Christian leader who advocated understanding and empathizing with non-Christians instead of taking issue with them.

Francis Schaeffer was not afraid to ask why, and he did not rest until he had an answer. Why are our most brilliant thinkers in despair? Why is our art so dark? Why have abortion and euthanasia become so easy on the conscience of a generation? What process of thinking has led to this ultimate denial of the value of human life? Though some may disagree with his answers, no one can gainsay the passion with which he sought them.

The normal human reaction is to hate what we don't understand. This is the stuff of prejudice and the cause of hate crimes and escalating social evil. It is much more Christ-like to identify with those we don't understand—to discover why people do what they do, because we care about them, even if they are our ideological enemies.

Jesus asked us to love our enemies. Part of loving is learning to understand. Too few Christians today seek to understand why their enemies think in ways that we find abhorrent. Too many of us are too busy bashing feminists, secular humanists, gay activists, and political liberals to consider why they believe what they do. It's difficult to sympathize with people we see as threats to our children and our neighborhoods. It's hard to weep over those whom we have declared enemies.

What powerful, penetrating words...! And how so very much like Jesus, of whom Luke declared,

Two of the quotes that have always gripped my heart were attributed by those that referenced them to Frank C. Laubach, a missionary statesman from yester year,

"Let my heart be broken with those things that break the heart of God."

"Lord, forgive me for looking at the world through dry eyes."

What God is looking for, of course, in our response to the needs of those who do not know Him is action, not emotion, but it sometimes does us good to weep over the world, especially if it moves us to reach out our hands to others in Christ's name.
May His compassion move us to action...!
Posted by Unknown at 1:00 PM