I hopped the train in London yesterday and rode up north to Retford, near Nottingham. It was amazing to be riding along at high speed and uploading these photos I took with my cell phone with the English countryside whizzing by...! The yellow plant in full bloom out in the fields, by the way, is rapeseed, used in making oils of various types. 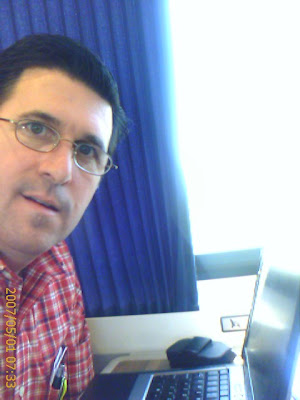 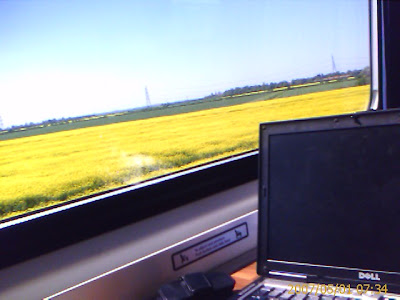 I just happened to come at a time when the weather hear in Britain has been absolutely gorgeous - no fog, rain, or cold, just lots of warmth, blue skies, and sunshine. That has made the views all the more beautiful as I have travelled by both train and automobile.

After my arrival in Retford last night, Paul Alexander, the principal of Mattersey Hall, and his wife, Carol, took me out for a typically British dinner of meat pie with sticky toffee pudding and custard in the shadow of Lincoln Cathedral. (My camera stopped working, but I managed to find their picture and one of the cathedral on the internet.) Paul will be preaching for us at Hillcrest Church while they are in the States this coming October. 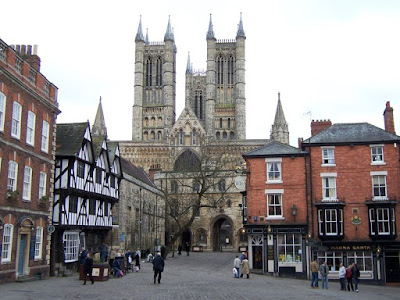 I lodged at a small inn near the school named The White Swan; had a typically English breakfast this morning that included fried eggs, fried ham, and baked beans; and then headed over to the school. Even though this is my third day in the U.K., I still find myself walking around to the right side of the car when I am a passenger! I have driven in Britain in the past and did not find it to be too great a challenge, but it always takes me a few days to develop new reflexes, especially when crossing the street as a pedestrian.
The worship in the student chapel was a real treat. I am not enough of a musician to analyze the differences between worship music in the U.K. and that in America, but even my untrained ear detects a distinct difference. It seems the melodic lines here are richer, somehow more varied and complex, with a certain lilt to them. Most importantly, the worship was obviously straight from the hearts. Pastor John Andrews from Rotherham New Life Christian Centre in a neighborhing city and his staff gave a stirring update on what God was doing through the ministries of their church and launched an appeal for students to work with them during the summer and next fall as they plant two more daughter churches.
Mattersey Hall is a wonderful institution that offers fully accredited undergraduate and graduate degrees in various ministry and theological concentrations including a full Ph.d in connection with the Univesity of Wales. Their student body comes from around the U.K. and serveral other countries. They also have a great distance learning program. Their campus is spread across some fourteen acres and headquarted in an 18th century mansion. My camera stopped working so I could not take a photo and have been unable to find one on the web, but trust me, their facilities are beautiful!

After speaking to the students in one session then to the faculty and administration in another, it was back on the train to scoot down to London to catch a late evening flight over to Paris.
Posted by Unknown at 9:45 AM