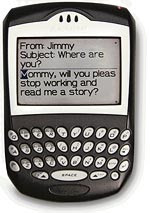 How things have changed since email first appeared on the scene a few years ago! I remember thinking back in the early 90's when Teresa and I were living in France and I had just discovered email, "Wow! If only we could communicate with our friends and contacts in the States this way. That would be so much cheaper than transatlantic phone calls and so much quicker than regular mail."
In recent years, the pendulum has swung to the other end of the spectrum, with the proliferation of various kinds of hand-held devices and text-enabled cell phones. A couple of months back, the Wall Street Journal ran an article every "wired" parent needs to read entitled, "BlackBerry Orphans." If you are like me, you will probably say, "Ouch!" sometime before you have finished it, but trust me, it's like that old-fashioned medicine your mother poured into your mouth when you were a kid. It may sting a bit, but it will do you good...!

Here's a little taste to whet your appetite:

In Austin, Texas, Hohlt Pecore, 7, and his sister, Elsa, 4, have complicated relationships with their mother's BlackBerry. "I feel very annoyed," says Hohlt. ... Elsa has hidden the BlackBerry on occasion -- Hohlt says she tried to flush it down the toilet last year. Their mother, Elizabeth Pecore, who co-owns a specialty grocery store, denies the incident. But Elsa also seems to recognize that it brings her mom comfort, not unlike a pacifier or security blanket. Recently, seeing her mom slumped on the couch after work, Elsa fished the BlackBerry from her mother's purse and brought it to her. "Mommy," she asked, "will this make you feel better?" Emma Colonna wishes her parents would behave, at least when they're out in public. The ninth-grade student in Port Washington, N.Y., says she has caught her parents typing emails on their Treos during her eighth-grade awards ceremony, at dinner and in darkened movie theaters. "During my dance recital, I'm 99% sure they were emailing except while I was on stage," she says. "I think that's kind of rude." ... Some mental-health professionals report that the intrusion of mobile email gadgets and wireless technology into family life is a growing topic of discussion in therapy. They have specific tips for dealing with the problem, like putting the device in a drawer during a set time period every day. "A lot of kids are upset by it," says Geraldine Kerr, a licensed marriage and family therapist in Morristown, N.J. She says parents need to recognize that some situations require undivided attention. When you shut off the device, she says, "You're communicating nonverbally that 'you matter and what's important to you is important to me.' " Still, like teenagers sneaking cigarettes behind school, parents are secretly rebelling against the rules. The children of one New Jersey executive mandate that their mom ignore her mobile email from dinnertime until their bedtime. To get around their dictates, the mother hides the gadget in the bathroom, where she makes frequent trips before, during and after dinner. The kids "think I have a small bladder," she says. She declined to be named because she's afraid her 12- and 13-year-old children might discover her secret.

When I read that, it is easy for me to say, "Thank God I've not gone to that extreme!"
The reality is that sometimes my own wife and children have needed to me pry me away from some keyboard or another, insisting that I turn the thing off, while reminding me to look directly into their eyes while listening to them or speaking to them.
Do you have such tendencies? If so, let's hold each other accountable...!
Posted by Unknown at 1:26 PM