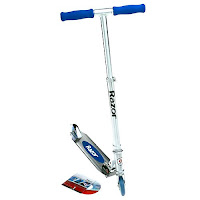 A few moments ago, my five year old son came running into the living room - he rarely walks these days - carrying a sale ad from the Toys-R-Us store with his finger mashed down hard on a picture of a toy scooter. It's the kind any healthy, rambuctious, red-blooded boy would love to careen on around the concrete sidewalk in our backyard, with one foot firmly planted on the running board, and the other pounding the pavement.

He loudly announced, "I want THIS for my birthday...!"

Since that particular date is still a good ten months away, I responded in my best, all-knowing, parental tone, "Well, we'll just have to wait and see."

He doesn't yet know the peculiar role of four-letter words in the English language, but his reaction to the "W" word was predictably visceral: "Daddy, I want it NOW!"

The subject kept coming up throughout breakfast between bubbly bites of Cheerios, and I am sure it will punctuate much of our dialogue throughout the rest of this sunny Monday morning here in Dallas, as I try to explain to his earnest, impatient mind that there is a time and a season for everything, and that there are no birthdays in the Brand household during the month of March.

I am sure God sees some of his conversations with me through the lens of what just took place in our family room and kitchen. I often go to Him in prayer with needs that seem pressing, even earth-shaking in their urgency, convinced of His inherent goodness and generosity, fully expecting a quick response. Sometimes I am stunned when His Spirit whispers these words back to my inner being: "The time for that will come one day, but not right now. Later."

When His ancient people stood poised on the banks of the Jordan River, ready at last to cross over and enter into the destiny He had repeatedly promised them in glowing terms as a place of unbelievable abundance and fulfillment for every family, their leader, Moses, brought them the word of the Lord, prophesying incredible victory over their enemies,

"27 “I will send my terror ahead of you and throw into confusion every nation you encounter. I will make all your enemies turn their backs and run. 28 I will send the hornet ahead of you to drive the Hivites, Canaanites and Hittites out of your way. 29 But I will not drive them out in a single year, because the land would become desolate and the wild animals too numerous for you. 30 Little by little I will drive them out before you, until you have increased enough to take possession of the land." (Exodus 23:27-30, NIV)

Imagine the thrill that went through the heart of every warrior as they heard the Lord Almighty spell out the terror and confusion He was going to wreak on their enemies by His own, outstretched hand! Then came the words they did not want to hear, "But I will not drive them out in a single year...Little by little I will drive them out before you, until you have increased enough to take possession of the land."

God's "little by littles" in my own life have often taken much longer than I would have chosen. Like most every child that has ever lived, I was certain I was ready for my destiny far quicker than my Heavenly Father. In His infinite wisdom, though, He has always known how to perfectly pace my progress. My challenge has been to neither lag behind Him or nor run out ahead of Him as He unfolds His plan for my life in His own, good time.

Let me encourage you to begin this new work week with the principle of Exodus 23:30 hidden in your heart. Little by little, He will fulfill His promises. He is with you, His eyes are upon you, and He has promised to work for you, and through you as you walk with Him. Dare to trust Him enough to establish the when as well as the what and the where of your destiny. He is never late. He is never early. He is always right on time!
Posted by Unknown at 8:20 AM

Email ThisBlogThis!Share to TwitterShare to FacebookShare to Pinterest
Labels: Devotions