Greetings from Daniel and Eva Mrsec in Split, Croatia

I arrived here last night in the city of Split, Croatia on the Dalmatian coast of the former Yugoslavia. I have been very warmly welcomed by our friends, Daniel and Eva Mrsec. 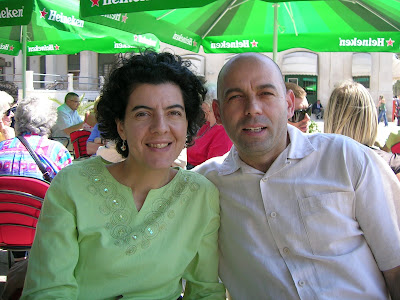 Night was already falling when I arrived, but when I tumbled into bed some time after midnight, I could tell by the twinkling lights outside my window that the view this morning would be beautiful. As you can tell, I was not disappointed...! The only difference between this snapshot and reality is that the sky is perfectly blue, the sun is shining brightly, and the sea is beautiful. The lens on my cell phone's camera just doesn't do this view justice. 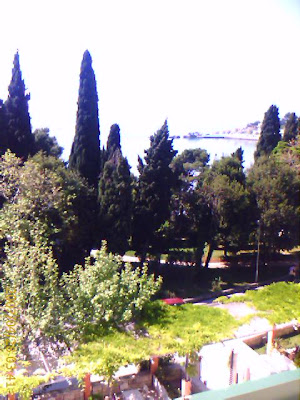 Hillcrest Church has partnered with Daniel and Eva from the time they founded the Evangelical Goods News Church in 1992. Your Faith Promise Missions offerings help us invest in high quality, fruit bearing ministries like theirs. This morning, as we sipped wonderful espresso coffee in a typically noisy cafe down by the city's harbor on the Adriatic coastline, I recorded a short greeting from them for all their friends at Hillcrest Church. To watch it, click on the image below.

Following our coffee, we went out for a delicious lunch by a marina, along with Vieko, Daniel's brother, who works with their youth ministry. The friendly waiter took this photo. The seafood here is excellent, including the squid...! 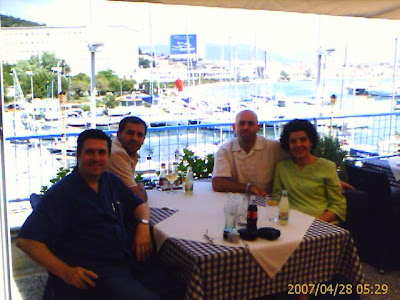 The old city of Split is quite beautiful. First inhabited approximately seven hundred years before the birth of Jesus, it contains many picturesque streets and allies such as this one. 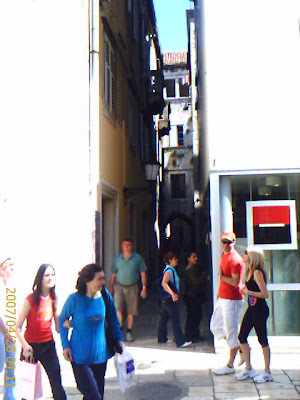 Below is a very small opening that was created to allow access through the wall during times of uncertainty when the city's main gate would be closed. This opening was called, The Camel's Gate. No animal or goods were allowed through this opening to enter into the city, no matter how valuable they were. All of that would have to be left behind when fleeing into the city for safety and the only way a human could come through was to bow their head and get down on their hands and knees. Seeing it gives new meaning to the words of Jesus when He said that it is easier for a camel to go through the eye of a needle than for a rich man to enter into the Kingdom of Heaven.

18 A certain ruler asked him, "Good teacher, what must I do to inherit eternal life?" 19"Why do you call me good?" Jesus answered. "No one is good—except God alone. 20You know the commandments: 'Do not commit adultery, do not murder, do not steal, do not give false testimony, honor your father and mother.'" 21"All these I have kept since I was a boy," he said. 22When Jesus heard this, he said to him, "You still lack one thing. Sell everything you have and give to the poor, and you will have treasure in heaven. Then come, follow me." 23When he heard this, he became very sad, because he was a man of great wealth. 24Jesus looked at him and said, "How hard it is for the rich to enter the kingdom of God! 25Indeed, it is easier for a camel to go through the eye of a needle than for a rich man to enter the kingdom of God." 26Those who heard this asked, "Who then can be saved?" 27Jesus replied, "What is impossible with men is possible with God." 28Peter said to him, "We have left all we had to follow you!" 29"I tell you the truth," Jesus said to them, "no one who has left home or wife or brothers or parents or children for the sake of the kingdom of God 30will fail to receive many times as much in this age and, in the age to come, eternal life." (Luke 18:18-30 NIV) 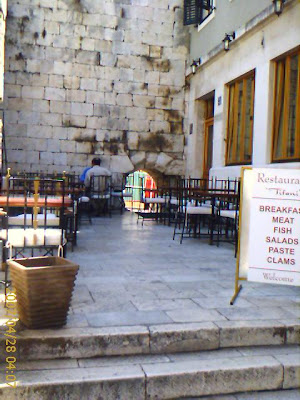 The city of Split was the residence of the Roman emperor Diocletan, who was the last emperor to fiercely persecute the Christians. In Bible times, the city was known as Salona and the Apostle Paul refers to preaching the Gospel in the region of Illyricum in his Epistle to the Romans.

18I will not venture to speak of anything except what Christ has accomplished through me in leading the Gentiles to obey God by what I have said and done— 19by the power of signs and miracles, through the power of the Spirit. So from Jerusalem all the way around to Illyricum, I have fully proclaimed the gospel of Christ. (Romans 15:18-19 NIV)

Traces of the Roman influence are clearly visible in the city's center where the old town is located. Note the columns below, which actually seem to my untrained eye to look more Greek than Roman (the city dates back to Greek times), given their entasis or bulge in the middle. 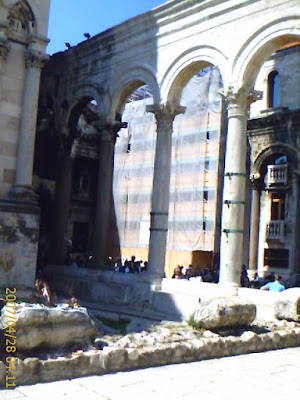 French archaeologists have also uncovered Roman mosaic flooring going back many years. The use of a cross in the design caught my eye and made me wonder if it dates after Constantine, given Diocletan's attitude toward Christians. One of the books I am reading on my trip, though, entitled, The Cross of Christ

by John R.W. Stott mentioned the fact that the use of two intersecting lines in symbolism actually predates the Christianity. Ancient pagan use was apparently based on the idea of horizontal axis intersecting a vertical axis to represent a connection between the earthly and the heavenly or by extension, the material and the spiritual, the temporal and the eternal, etc. Reading that actually thrilled my soul as I thought of how God was already preparing human hearts to understand the meaning of the cross of Christ long before He was ever crucified. For Jesus really is the only possible intersection or integration point between the human and the divine...! 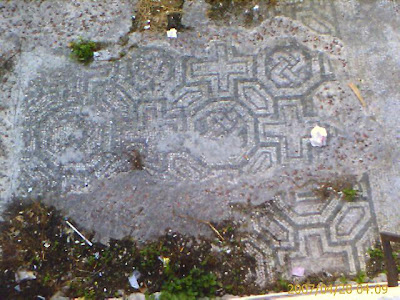 Below is a poster showing an artist's conception of how the city looked in Roman times. Today, the city market bustles with activity within the shadow of the ancient walls. Fresh vegetables, fish, seafood, clothing, and about anything else anyone would need for daily life can be bought here at a much better price than in the shops in town. 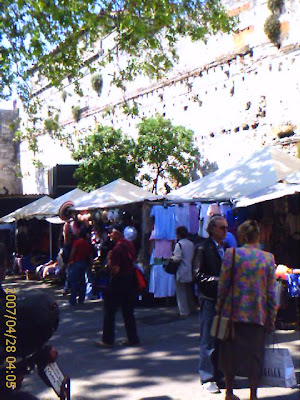 Although I have had a lot of fun today, I really look forward to sharing God's Word with their congregation tomorrow. When you read this, please take a moment to pray for the Mrsecs and for all of our brothers and sisters here. Split is near to some of the spots in the Balkans that have known tremendous troubles in recent years, including Sarajevo, Mostar, and Srebrenice. The fighting came within twenty miles of the city. Thankfully, things are much, much better now. Pray for continued peace so that the good news about Jesus may spread here without hindrance.

19Pray also for me, that whenever I open my mouth, words may be given me so that I will fearlessly make known the mystery of the gospel... (Ephesians 6:19 NIV)
1Finally, brothers, pray for us that the message of the Lord may spread rapidly and be honored, just as it was with you. (2 Thessalonians 3:1 NIV)